Nine out of Ten Cats 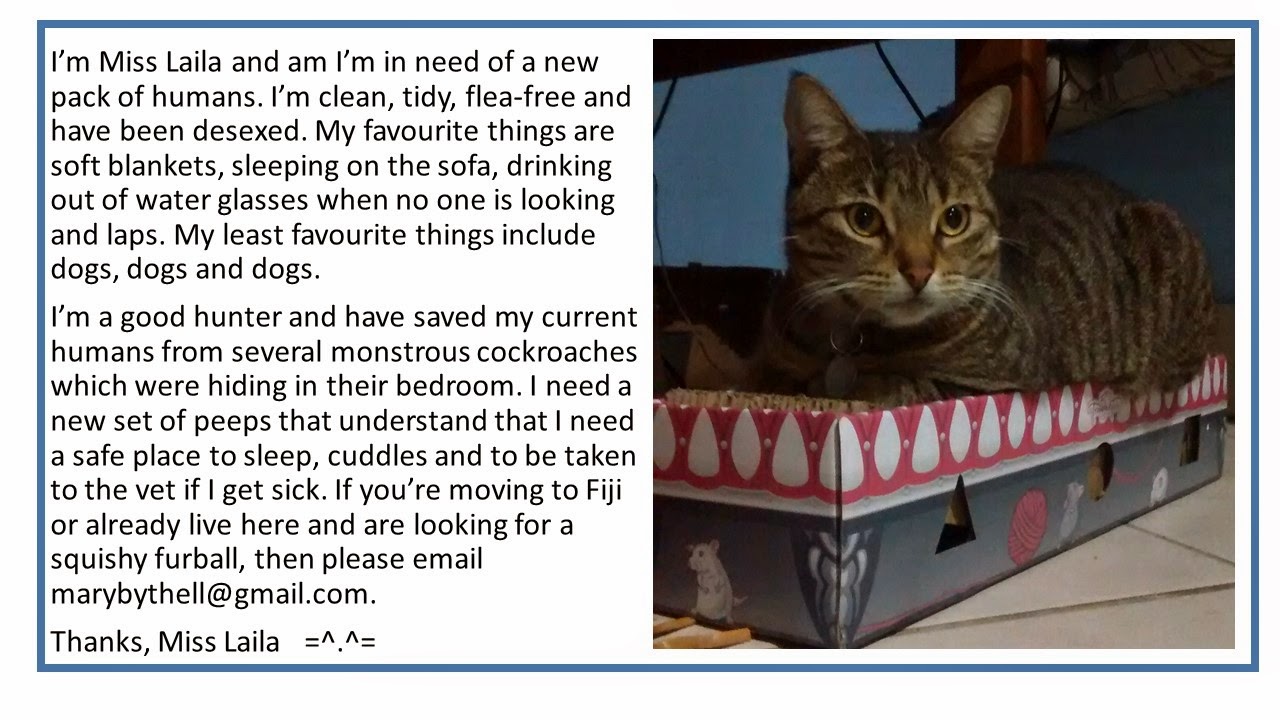 Meet Miss Laila. She’s a cat. While our other cats are aloof and slightly skittish, she’ll sit on anyone’s lap, particularly if it is already occupied by a laptop.  Out of the ten cats that we've rescued while we've been here, she’s the friendliest.

“You've rescued ten cats!” I hear you cry through cyberspace (believe me, I've heard it enough in person). Now take the next thought that is about to pop into your brain and strangle it before it fully forms. These poor homeless pusses were not the product of feckless locals not looking after their pets properly. No, nine out of ten of these cats were the result of the behaviour of someone that in expat parlance is cleverly referred to as a “bad expat”.

Though it needs in-depth anthropological study, I suspect that bad expat behaviour is not linked to people being inherently malevolent (in other words, just being a bad person), but rather an inexplicable lapse of normal behaviour when transplanted to a new environment free from the conventions of home (“Seatbelt? No, in Fiji I've acquired super-human strength that allows me to survive being flung though the windscreen at high speed!”). I've got quite a bit to say about bad expats, but this isn't the right time or place to have that uncensored discussion, so I’ll continue to mutter under my breath about them, quietly taking notes.

Now, back to cats. The road to becoming a certified crazy cat lady began soon after we moved to Fiji when we started to feed a pregnant female cat (Momma Kitty aka Goldie aka Cat 1) who had been abandoned by her expat owner when he and his family moved out of the neighbourhood. Soon she produced two tiny kittens (Daenerys Stormborn Targaryen aka Khaleesi aka Cat 2 and Regulus Arcturus Black aka Reggie aka Cat 3) in the stack of packing boxes outside our back door.

I can honestly say that without the appearance of those three wonderful whiskered balls of fluff, our time in Fiji might have been dramatically curtailed. Do not underestimate the power of pets to give you a sense of home when, standing at the bottom of a sweaty black pit of despair, you begin to question the wisdom of moving so far away from family, friends and Marks & Spencers.

When another expat family abandoned a pregnant Miss Laila (Cat 4) and her adolescent feral male offspring, Ollie (Cat 5), she moved straight in with us (we’re suckers and they know it) and quickly produced Cats 6-9. Did I mention that Miss Laila’s mother was Mamma Kitty (Cat 1)? So you can see that because some feeble expat couldn’t be asked to cough up the FJ$50 (approximately US$25) to get Goldie desexed in the first place, she turned into a Mama Kitty and was responsible for at least eight cats which were totally surplus to requirement.

Almost all of the cats have been rehomed, but we are looking for a new set of humans to look after Miss Laila. Ollie is still feral. We hadn’t seen him for nearly six months when I came downstairs one morning last week and found him asleep in the fruit bowl (obviously). He chowed down a couple bowls of kibble, asked for a scratch under the chin then headed off into the undergrowth without looking back.

And cat number ten? Poor little Teddy was found in a carpark in the middle of Suva by one of Anna’s friends aged two weeks. We hand fed him and raised him until, when he was four months old, a houseguest accidentally let him outside and he was killed by a pack of feral dogs. Seriously, don’t get me started on irresponsible dog owners – I wouldn’t be able to shut up.