I waste an inordinate amount of time productively. Since moving to Fiji, I've expanded my vocabulary playing Words with Friends to include the very useful qi, dox, kine and za. I now have a good working knowledge of how Twitter works to the point that I gave my sister an hour long tutorial on Skype.  I have an active and attractive account on Pinterest (who takes all of those amazing photos?) and have accumulated about a thousand recipes to try some time in the future when I've got time. Oh, wait a minute, I do have time.

Actually, I do cook a lot here. After the initial honeymoon period with Fiji when there were still so many restaurants to try and not be disappointed by we ate out a lot. Eventually, we settled on our two favourites – Maya Dhaba (best butter chicken and naan bread ever) and Bad Dog (sashimi starter is the best thing on the menu). The combination of expanding waistbands and a shrinking bank account meant that cooking again seemed like a good idea. During my early attempts I usually ended up having to shower afterwards because I’d get so sweaty (one particularly memorable occasion included carmelised banana pancakes on a blazing hot morning – what was I thinking?). However, I learned how and where to shop (the market, Lazy Chef, Whaleys), what to avoid (local sausages and minced beef) and to turn the air con on if the temperature outside was already uncomfortable.

Unless it’s tipping it down or the outside atmosphere is sauna-like, barbecuing is an option and we do it a lot. In fact, I've started to wonder if I’m getting medieval northern European lung disease from the amount of particulate matter I've inhaled trying to light slightly damp charcoal with substandard firelighters. Our little back patio is eerily like our little patio in England, except in England we don’t light our patio with Tiki lanterns and the bats flying overhead don’t look capable of carrying off small dogs. 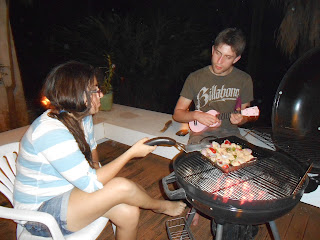 Alex and Anna demonstrate the correct use of the patio.

Travelling and eating go together like wine and cheese, bread and butter and Fred and Ginger. When I’m in California I head straight for In–n-Out and order a cheeseburger, fries and a chocolate shake, eat Mexican food from taquerias, search for the perfect margarita and eat a lot of hot Italian sausages. In France it’s Breton butter with crunch seasalt crystals smeared thickly on bread. In Fiji, it’s tuna. Tuna steaks on the grill with garlic aioli and grilled tomato salsa, made with mint and fresh coriander (dhania here in Fiji). Raw tuna sliced and served with Japanese rice balls, wasabi, lime and finely diced locally grown chillies and fresh ginger. Leftover tuna made into salad. Tuna, tuna, tuna. We never get sick of it in our attempts to deplete the Pacific of its most delicious fish. We get our tuna from Island Ika, who post what’s in everyday on their Facebook page and, refreshingly from a health and safety perspective, keep their fish on ice. We have to eat a lifetime’s worth of tuna during our stay here as the average lump of tuna that I buy for sashimi at home would cost about a week’s salary in the UK. 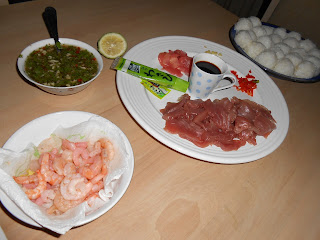 My foodie photos will not be on Pinterest any time soon.

Other things that we feel the need to consume a lot of during our stay in Fiji include passionfruit, pineapple, cassava (who would have thought tree root could taste so delicious?) and New Zealand’s Tip Top Cookies and Cream Ice Cream. Local fish and produce are relatively inexpensive as long as you buy in season – during my year here, tomatoes have ranged in price from FJ$1 to FJ$18 a heap. Heaps are the unit of measure in the markets here and literally are heaps of whatever either piled up on the table or in small bowls. It does pay to ask how much things are before you start getting them to fill your bags at the market just in case you end up with a FJ$7.00 red onion like I did.

Imported food, on the other hand, is expensive and reliance on it can lead to bitter disappointment. Mayonnaise, for example. I grew up eating Best Foods mayonnaise, which personally, I think is the best in the world. Some of you may know it as Hellmans since though the two companies merged in 1932 they haven’t got around to unifying their brand names. I was relieved to see Best Foods for sale at Cost u Less when we first arrived, but after a few months there was none on the shelves. At that point, I hadn't learned the finer points of hoarding and paid for it. Antipodean mayonnaise is disgusting. I don’t know what they make it out of, but every brand we tried tasted like salad cream made with machine oil and a large dollop of sugar. We mourned for garlic aioli and tuna salad as did others who lamented to lack of good mayo on the Suva Expat Facebook page. However, we did drop a few pounds.

When we first arrived, we had English visitors, one of whom was incensed that the best condiment in the world, A1 Steak Sauce, had been invented by the Americans. Well, I could write an entire post about Americans and condiments (my neighbour in the UK who inherited all of our condiments joked that he had a special cupboard made just for our mustard). Lo and behold, out shopping the next day I found A1. Anna was instantly enamoured and it went straight to her top ten tastes of all times. Of course, we haven’t seen it since.

My current obsession at the moment is sourdough. September is sourdough month and with that in mind, I thought that I’d see if you could make a successful sourdough starter in Fiji with nothing but rye flour and water. Fijian microbes are notorious for being super-sized. You are advised by people that have been here longer than you and survived with all of their limbs intact that any cut or scratched bit needs regular liberal applications of anti-bacterial cream and that you need to have a low threshold for antibiotic seeking behaviour if you get any sort of lurgy. Well, I can tell you that within 48 hours I had a sourdough that smelled like Newcastle Brewery on a still day bubbling away on my counter.

On the counter is a bowl of the good stuff waiting to be made into sourdough poppy seed pancakes tomorrow morning. I brought the poppy seeds back from Australia in May because I couldn't find any here. I've since been told that poppy seeds are now on a list of things that cannot be brought into the country, presumably because there’s a fear that we might start producing opium. Well, I’m not going to waste my poppy seeds trying to grow them. I’m going to eat them and savour every precious bite.