I was going to entitle this post "Proud to be 'Merkin" as in American, of course. However, I now realise that a merkin is a a toupee for the pubic area/genitals.The new title now refers to kittens and the warm feeling that I have about the election and has nothing at all to do with hair pieces used by 18th century syphilitics.

So much has been happening lately it’s hard to know where to start.

A couple of weeks ago our pregnant cat appeared not to be pregnant anymore. We’d assumed that she’d lost her kittens until we discovered two in one of the packing boxes stacked in the garden. I moved them all inside when I heard mama cat trying to scare away a large tom who was trying to get into their box. John grumbled the way that dads do when they’re pretending not to be big softies, but we know that he thinks that they are as cute as we do. The plan is that we’ll get them all neutered and vaccinated in December. We’ll then have to decide what to do with them. No prizes for guessing which way Anna will be voting. 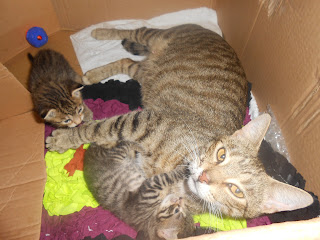 Speaking of voting – WELL DONE AMERICA! It’s easy to be an American abroad when we've got a great president. When George Bush was elected for a second term I spent the entire four years being quizzed about how it possible could have happened, like it was my own damned fault.

I was very lucky to get to go to the election party at the US embassy, as a plus one to one of John’s colleagues. They’d done a ballot at the party.  I don’t know what the exact numbers were, but it was something like Obama 110, Romney 8. I’m not sure how to interpret that without angering my Republican friends. Actually, I’m not sure I have any (friends that vote Republican, not friends in general). I hope someone emails me the photo of me with my arm around a cardboard cut out of the president. I wonder what they did with the one of Romney.

One interesting factoid that I learned during the election was that I have never been in a Republican stronghold state, except to pass through an airport. Maybe we should move to Tennessee next. I’m sure that, to me, it would be as foreign as Fiji.

From the embassy, we moved on to Oceania Art Gallery for the opening of an exhibit, briefly stopping at home to pick up our mobile phones (no point in taking them to the embassy as you have to check them in). Anna proudly showed us the remains of a scorpion that she’d squashed with a wooden spatula (it was Anna...in the kitchen...with the spatula). This place is seriously hardening her up. At the art gallery I bought a lovely pen and ink drawing by a local artist which I will share with you once the exhibition is over in December. Now I know why they serve wine at exhibitions – to loosen the purse strings.

I was invited to go for a walk with a friend that I made at the fundraiser at the Fijian Museum a couple of weeks ago. Noriko is a very interesting woman who has recently lived in both Afghanistan and East Timor. Her emails to her friends during her four years in Afghanistan were published as a book (see here for a blog post about it).  I think that I needed to hear from someone that knows a thing or two about these things about the need for patience in moving forward with my life here. Meeting people like her is definitely one of the benefits of living someplace like this.

While I’m waiting to get a job I’ve signed up to do an intensive Fijian language course with Alliance Français. I’m looking forward to it for many reasons, but am particularly glad of the timing – it coincides with Anna travelling to the UK for five weeks over Christmas. I’m going to miss her so much - she’s such good company for her dear old parents. Maybe once I've cracked Fijian, I’ll have a go at French, which, despite numerous holidays to France over the years when we lived in the UK, remains mystery to me.

For those of you that may have missed it, last week our housekeeper, Mela, showed me how to make roti with potato curry. Next week we’re going to make Fijian donuts. I may shortly have to buy an entire new wardrobe consisting of trousers with elasticated waistbands and smocks.
Posted by MaryB at 18:21 1 comment:

Suva, Can I Learn to Love You?

It’s a funny thing, not working in paid employment. When I was slogging through the bureaucratic quagmire of the UK NHS I could go home at the end of every day and say that I had been at work, even if I hadn’t really accomplished anything (and believe me, that is how it felt sometimes). Now my days are completely task driven but what I am able to achieve doesn’t sound very impressive. (“Hello honey, how was running the university’s research & international office? Today I paid the phone and electricity bills and found a place that sells cat litter!”)

It’s unbelievable how exhausting carrying out these tasks is. It’s also kind of embarrassing. It hardly seems right to complain about being tired after a day of internet banking, doing a few laps in the pool and avoiding the housekeeper. It must be the combination of the heat and my brain losing functionality.

I totally relate to this clip from the Mitchell and Webb Look. It's a little rude at the end, so if you're easily offended stop watching after you get the gist.

Speaking of exhaustion, Anna had Friday off school again for the sole reason that neither of us could face getting up at 6am for a fifth day running. Before you all go off and judge my parenting decisions, can I just remind you that Anna is retaking the last term that she already finished in the UK? Most of her Suva classmates are taking their GCSE exams which she absolutely aced in May/June (clever girl). Things will get serious come January 2013 when she starts the International Baccalaureate, but until then... 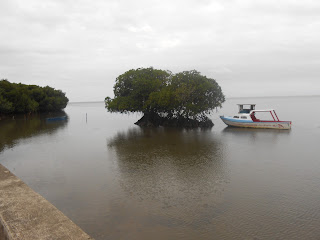 A little mangrove stand on the walk into town. Note the brown water.

We had a wonderful day off. I introduced Anna to Bulaccino’s, a coffee shop that I’d stopped into the day before while running the aforementioned errands. It really is an excruciatingly ridiculous name (Bula + cappuccino = Bulaccino = Helloccino in English), but the service and food are of an international standard that we haven’t really found very many other places here. They also have smoked salmon, which is Anna’s all time favourite food. I know that we’re supposed to eat local produce and most of the time we do, but sometimes what you need is a little bit of home on top of a delicious homemade bagel smeared with cream cheese. 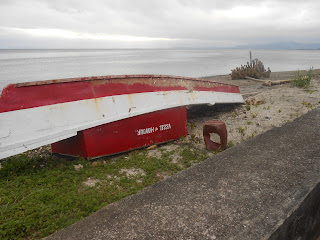 The Vessel of Honour and the view across Suva Bay.

It was a lovely evening so we set off on a walk. We ran into one of Anna’s classmates and her mother (it’s that small town thing again) and before we knew it, we’d walked the coastal route all the way into the city centre. While discussing whether we should eat out twice in one day, we found ourselves in front of the Bad Dog Cafe which pretty much decided it. This is the place where the waiter (Nat) greets us with “Hello John. Hello John’s family”. John was not with us (he was in Noumea), so we just got “Hello John’s family”. Nat took the opportunity to quiz Anna about our names while I went to the toilet.  Two Shirley Temples and two glasses of sauvignon blanc later, Anna and I decided that we could get to like this place.