New Year, new resolution, and I here I state publicly that in 2014 I will post on my blog at least once a month. I've enjoyed keeping the blog for its diary-like qualities and for the challenge of stringing words together in a pleasing way, but what I didn't expect was the number of people who have contacted me through the blog. Some want to know practical details about living in Fiji because they are arriving imminently.  Some are considering moving to Fiji and want to know the down and dirty on specific aspects of expat life. Then there are the other requests for guest blog posts (not a chance – too busy to write my own blog, thanks very much), a request for an interview for a travel magazine (unfortunately dropped into my inbox during frenzied work activity, so ignored) and a very sweet request to be interviewed as part of a student project (Clay & Co - you know who you are!).

When I first arrived in Suva I observed that the happiest expats were those that are counting down to their leaving dates. At first I took this as a sign that you could only be happy in Fiji when you were on your way out. Eventually I figured out that these people were frantically squeezing in their Fiji list of things to do (aka bucket list – hate that term) in their remaining tenure, resulting in a steady stream of what most people would consider holidays of a lifetime.

Once I realised this, I knew that we needed to make our own Fiji list and, more importantly, start ticking the items off without the pressure of an impending move. At the top of our list was visiting the Yasawas, so at the end of September, we booked a week long Blue Lagoon Cruise. Now, cruising isn't our thing - I strive not to look anything like those sweaty, slightly lost-looking people wandering through the streets of Suva with cruise-branded lanyards around their necks.  Any local rip-off artist that approaches me when a cruise ship is in town gets a “talk to the hand” palm in their face and a don’t-mess-with-me-I-live-here look.  However, the small boutique-boat BLC got rave reviews from friends and Anna, unlike us, was so enamoured with the idea of a cruise that she agreed to share a cabin with us.

Armed with a brand new underwater camera for John, we left Suva on the 7:30am Coral Express bus and by lunchtime we’d entered Fiji’s parallel universe – the well-oiled, international tourist world that is Denarau Island. Clean and slick, we finally saw what the majority of visitors see when they come to Fiji and we liked it. Except for the prices. How much for a Fiji Gold? You’re having a laugh - at our expense. 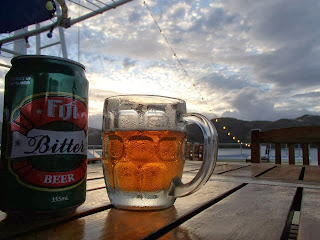 Because John and I have gradually turned into grumpy old people, we eyed the children running around the dock with our cruise ship name tags on their shirts and grumbled about how we were certain that the website had stated that children were not allowed on the ship. Boarding the ship, we were amazed to find that we were joined by only 14 other passengers on a ship that can hold around 65 passengers. The crew were friendly, the food generous and, despite our cantankerousness, the children delightful. How could you refuse to join a fancy hat competition when a nine year old offers to share her beachcombing hat-adorning treasures with you? 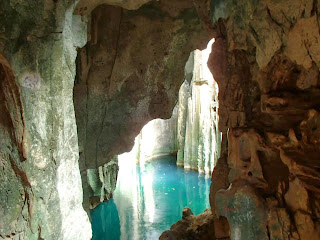 During the next seven days, we stopped at Modriki Island (where Castaway was filmed), visited villages, made new friends, ate five meals a day, stopped smiling for several days due to sunburned lips (I was still happy inside), snorkeled until we were pruney, dived on healthy reefs and generally reveled in some of the most beautiful scenery on the planet. I never knew that water came in so many shades of blue.

John took hundred (thousands?) of underwater photographs – mostly close ups. His attention to the art of photographing corals is laudable except that it means that his buddy (usually me) could be kidnapped by pirates or eaten by sharks (or both) without him noticing. On one dive, his dive buddy saw five sharks and he saw none. 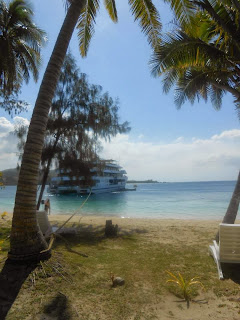 The ship tied to a coconut tree in the Blue Lagoon. 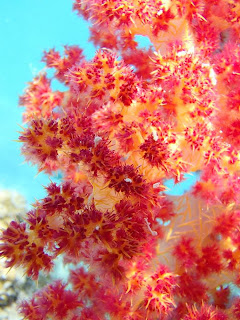 One of John's amazing close-ups.

I’d love to say that we’re definitely going to go back to the Yasawas – especially now that we've seen lots of placed that we’d like to go back to. However, we still have other items on our Fiji List to tick off first including the islands of Taveuni, Kadavu and the Lau group, the old capital of Levuka and whitewater rafting on the Navua River. So much to do - fortunately we still have a lot of time.