When I was a teenager and a frequenter of dining establishments open in the wee hours of the morning, there was a chalkboard in the local Denny’s foyer which stated “You only get three meals a day. Don’t waste them”. I have often pondered this bit of culinary wisdom when contemplating my vacillating waistline and America’s growing obesity problem.

I would rather make a bit of an effort to make myself something delicious for breakfast rather than resorting to toast, which I consider a sad excuse for a meal (unless it’s whole-wheat toast with Hellman’s mayo, avocado and chopped red onion  or similar). For lunch on work days, I usually dine “al desco”, but at least take the time to savour whatever I've made the effort to pack for myself.

When I started my job in Suva, I religiously took my lunch every day. The first day that I left it on the kitchen counter at home, I was stuck. Where would I get my lunch that wasn't too expensive? There’s not an M&S, Waitrose or even Starbucks in sight. The little restaurants dotted around the area of Toorak where I work looked too scary to enter, let alone eat anything out of. That day, I spent my entire lunch hour walking down to Dolphin Food Court to get sushi from the Daikoku. It really is the best take-out sushi I've ever eaten, but it’s a long way to walk and the entire way back is uphill.

The next time I forgot my lunch, I decided to brave one of the local Chinese eateries. I watched the person in front of me in the queue being served an enormous pile of food. When the server turned to me, I asked him to give me a small amount of rice and chicken. He plopped a paddle-full of rice that would have served at least two people into a Styrofoam container. He looked surprised when I stopped him serving me another pile of equal size. He covered the rice in a generous serving of chicken stir-fry and again seemed puzzled when I told him that was all that I wanted. “You want pork?” he asked holding up another ladle full of food. I said no and turned to the register to pay, glancing back, I saw the guy ladling more food into my takeout container. When I asked him what he was doing (politely) he said that obviously I didn't want pork, so I must want lamb.

As I sweatily trudged up the hill back to work with 1.5kg of lunch in a thin plastic bag every bad restaurant-related environmental health story ran through my head until I felt like I was carrying a throbbing bio-bomb. Then something happened that has never happened to me before and hasn't happened to me since – a destitute young man asked me if he could have my lunch.  I was as grateful to give it to him as he was to receive it. To be honest, I pretty much tossed it to him like it was a live grenade.

Fast-forward a couple of months and now I hardly ever take my lunch to work. This is because I have been shown the amazing secrets of Indian fast food. Sometimes I get Indian snacks late morning from the friendly staff at Khana Kazana on Toorak Road. If you haven’t had an idli (a steamed bready thing that looks like a flying saucer that’s been stuffed with a fresh chutney of grated fresh coconut, dhania (cilantro/fresh coriander) and chopped chilli, you should make it a culinary mission. They also make a fried spinach fritter things which are amazing as are their gulgula (little donuts). And it’s so inexpensive that it’s not even worth contemplating making them at home. 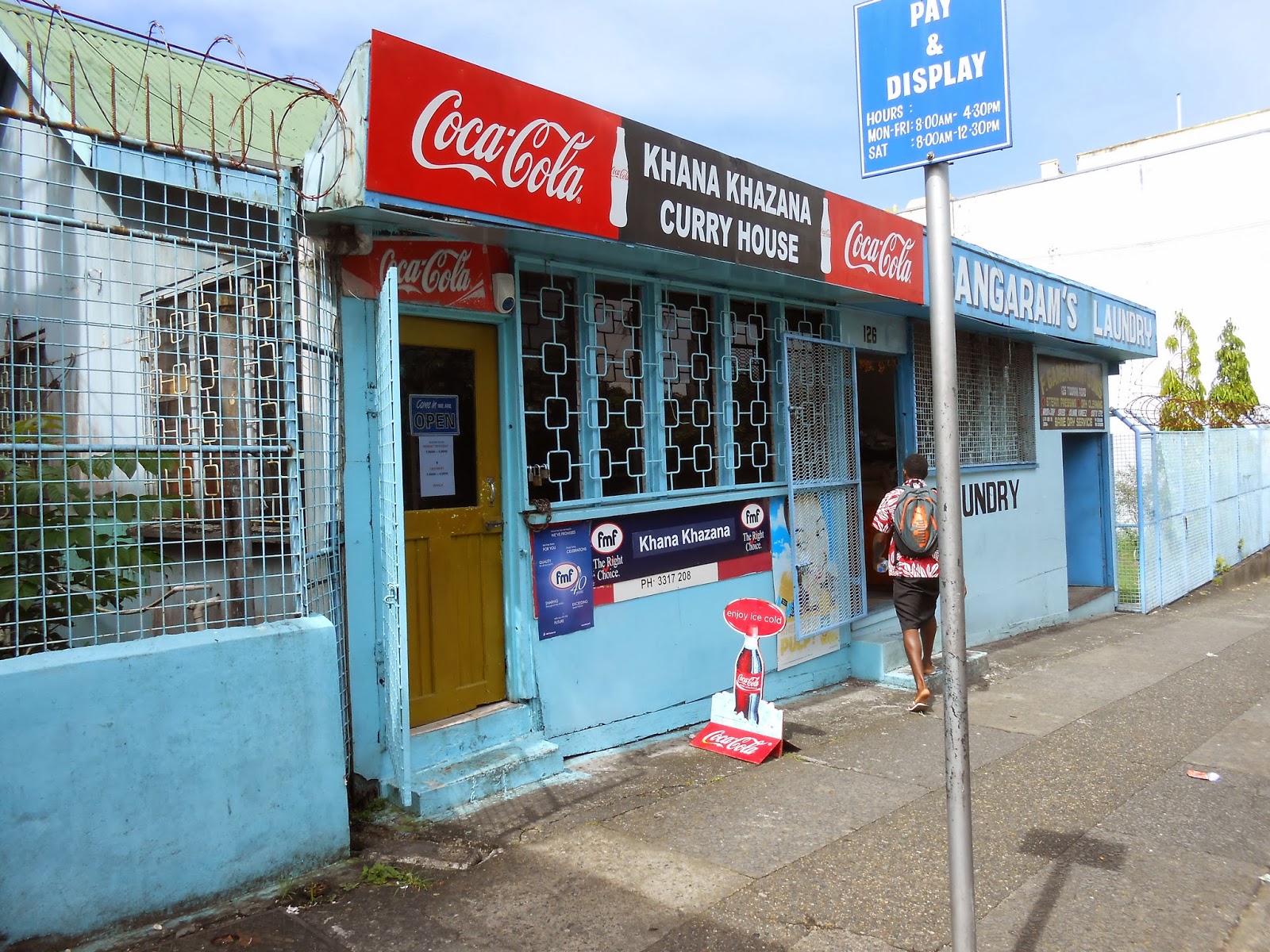 You have to get here after 9am and before lunch if you want to bag an idli.

If I want a proper lunch, I walk down to the Curry House. You have to cross the most dangerous intersection for paedestrians in Suva (the corner of Renwick St and Raojibhai Patel Street) to get there, but it’s worth it for the vegetarian thali (2 veggie curries with 2 rotis) for FJ$4.95. Cleverly origamied in butcher paper and wrapped in a plastic (the local term for a plastic bag) I sprint back up the big hill to work so that I can devour it without even resorting to a fork or spoon (I've become an expert at eating with roti rather than cutlery). 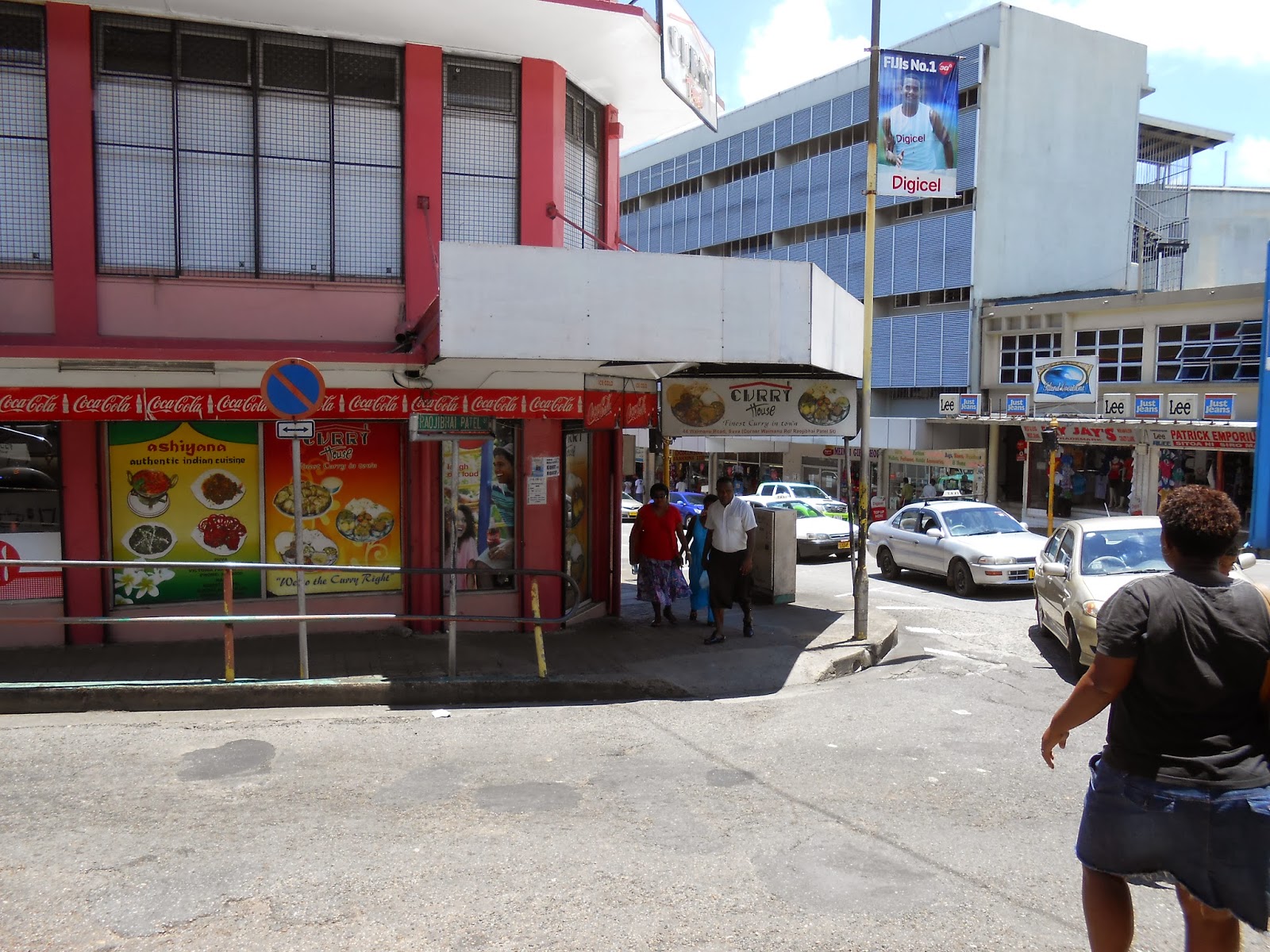 Running the traffic gauntlet to get to the Curry House.

This culinary discovery has piqued my interest in cooking Indian food at home – taking advantage of the amazing seafood and produce at the market to make a more healthy version of what’s available at restaurants and also to prepare me for the sad time when we’ll have to leave Fiji (and the Curry House, Khaza Khazana and my other favourite, Maya Dhaba). 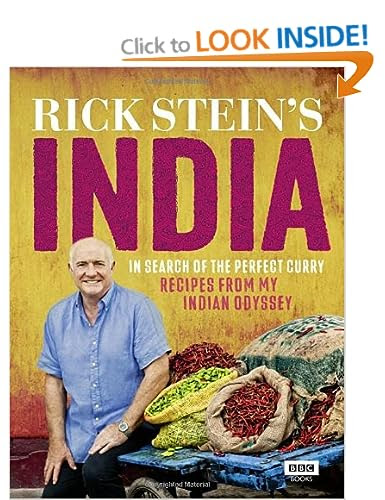 What my Rick Stein book looked like before a cat peed on the book jacket.

Santa brought me a Rick Stein’s India cookbook. I’ve managed to find all of the non-mainstream ingredients that I've needed from Halwai’s Spice World (aka Zealot Agencies aka Halwai’s Spice Castle). I briefly earned the scorn of the proprietor by asking if he sold coriander seed, which I couldn't find in any of the little store-packed plastic bags. “Do I sell coriander seed?” he muttered to himself leading me to a large burlap sack full of coriander seed, which the locals obviously buy in amounts that would take me a lifetime to get through. At that point, a lovely middle-aged Indo-Fijian fellow shopper took my arm and led me through the rest of my shopping list. 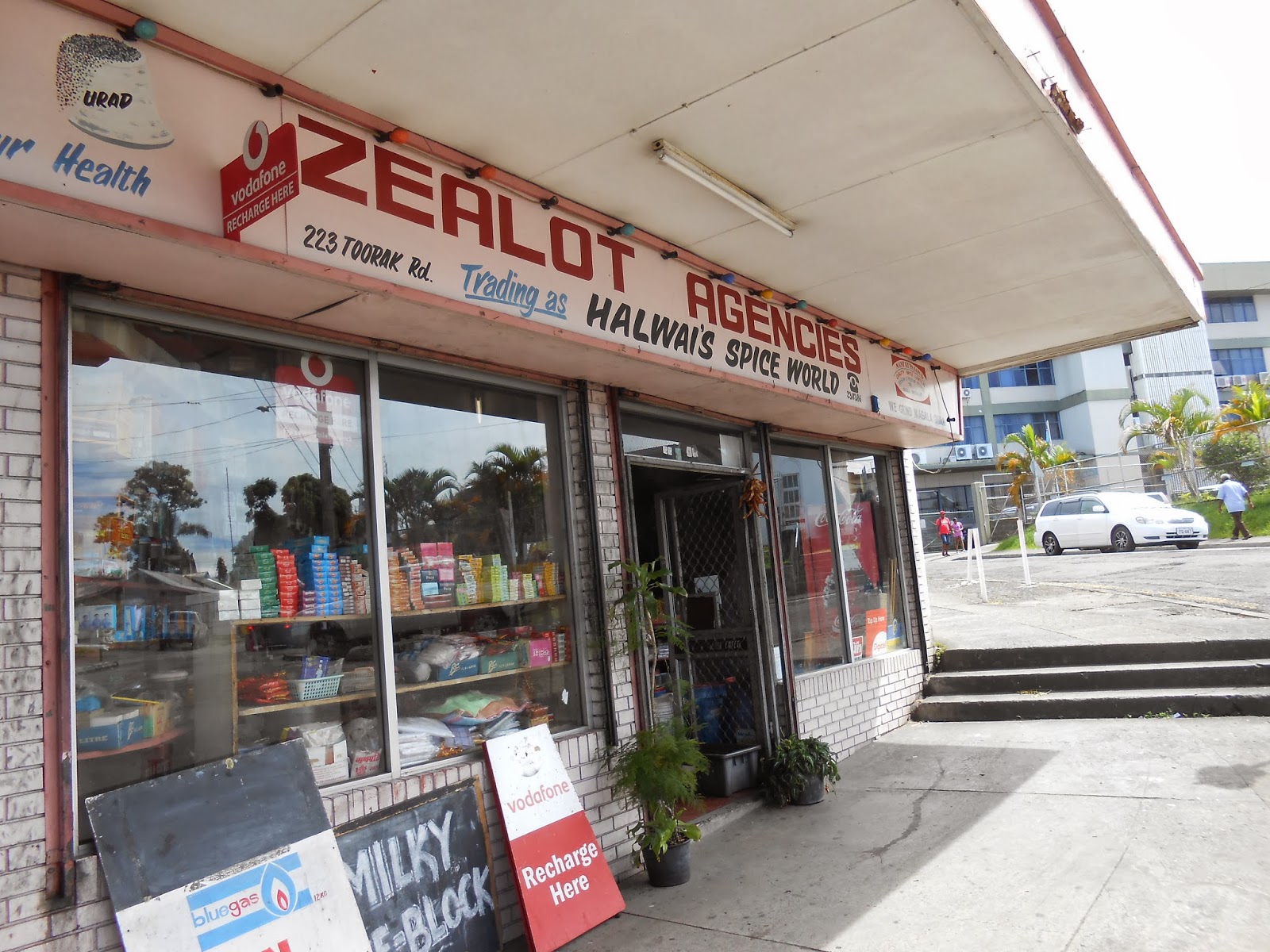 The name of this place is lost on me, but it has every Indian Spice imaginable. 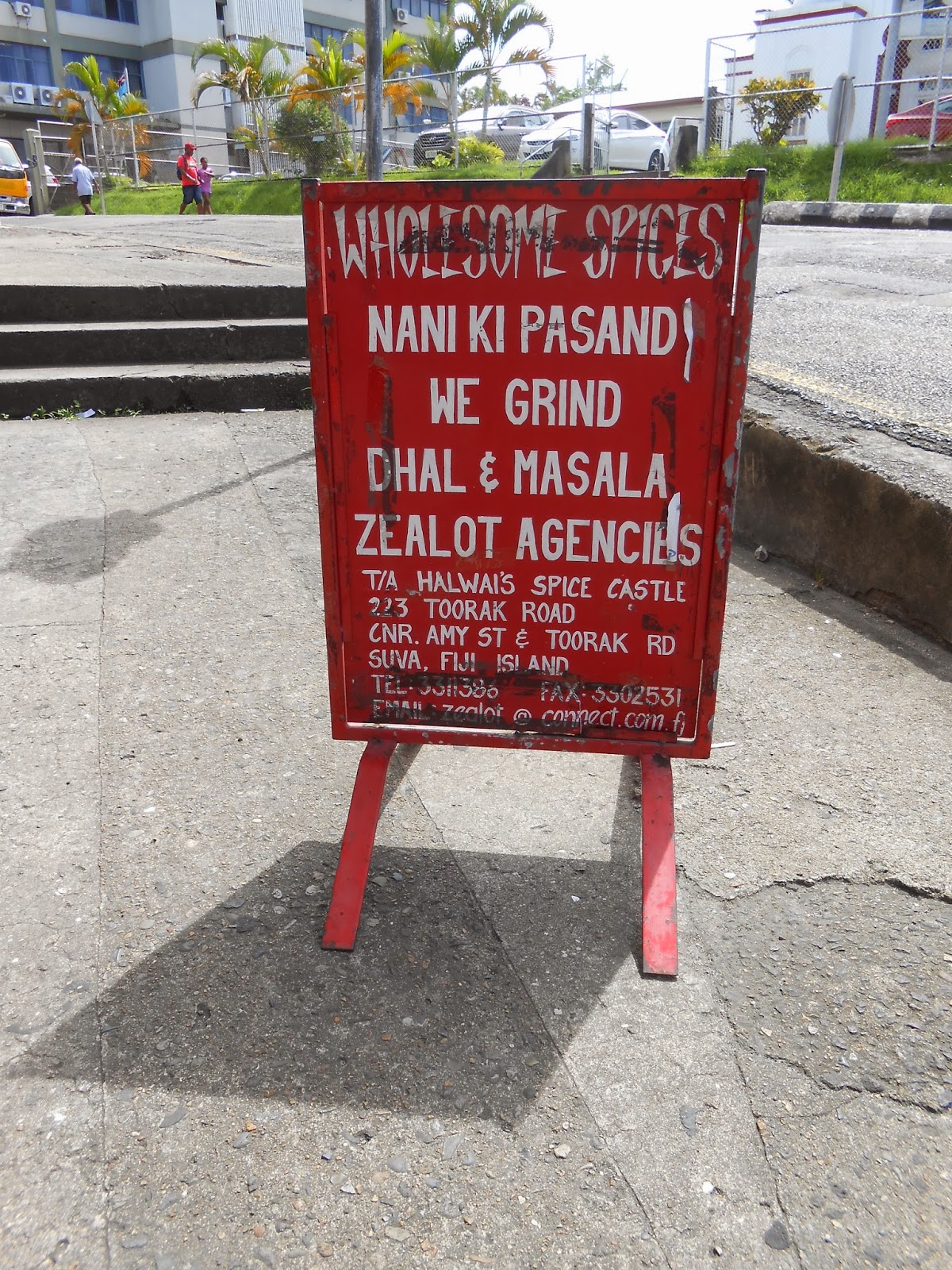 It truly is a castle of spice.

Don’t get me wrong – there are plenty of places to eat lunch in Suva – the little deli upstairs at Prouds makes good sandwiches, the food courts at Tappoo and MCHH have a huge amount of choice – noodles, Korean, Fijian, etc…). There’s even a McDonald’s. But by destroying my prejudices about what a restaurant should look like, I have totally expanded my culinary horizons. And for a person in their 50th year that’s been obsessed with food since birth, that’s quite an achievement.