Anna’s school (the International School, Suva) had a blood drive recently. I was a regular blood donor in the US and a not-so regular blood donor in the UK. One thing that put me off was the fifteen-odd page questionnaire that you had to answer that almost inevitably disqualified you from giving blood because of some obscure (or not so obscure) reason. No such problems here. The form was a one-sided piece of paper and the haemoglobin check consisted of me pulling down my bottom eyelids to reveal my healthy red eye sockets. As for the minimum weight requirement, the chap asked me to get on the scale, but when I stood up to walk over to it, he told me not to bother.

Besides the obvious altruistic benefits of giving blood there are other benefits. It’s the one time you actually have to eat cookies and take it easy for the rest of the day. I also get a delighted reaction when I tell them that my blood type is O negative. Though it is a complete accident of birth, it makes me feel bizarrely special to have the universal blood type. One thing that you must never do immediately after giving blood is have a few drinks at a dinner party. This can lead to dehydration and a severe hangover or vomiting in the neighbour’s hedge, or both. Don’t ask.

John said recently that if he died suddenly not to feel sorry for him as he’s had an amazing life so far. Of course I want him to live for a very long time, but barring a couple of blips (tearaway at age 15 and the “is this everything phase?” aged 36) my life has been awesome too. A good proportion of that awesomeness can be put down to the opportunities afforded me because of those very same accidents of birth that led to my blood type. Being here in Fiji I am constantly reminded of the privileges that come with being born into a relatively well off and educated family. 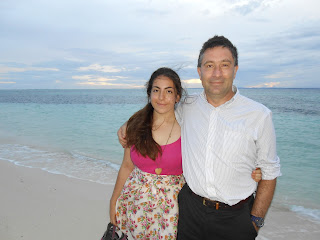 Two of the main reasons my life is so awesome.

One of the very frustrating things about being a trailing spouse in Fiji is that not only is it very difficult to get a job, but the law also makes it very hard to volunteer more than an hour a week. There is a lot of talent that could benefit local organisations going to waste as well as many families high-tailing it out of Fiji as soon as the working spouse’s contract is up because of these rules. However, there is a lot of energy spent in the expat community to try to make a difference in other ways.

The Corona group raises funds for local causes while providing a forum for expats (mostly trailing wives) and other interested people to get to know each other and learn about Fiji. I've previously blogged about their meeting in October that was held at the Fiji Museum. This latest meeting included a very sobering talk by some of the staff at Pacific Medical Services that provide reproductive and sexual health services throughout Fiji. Ladies of the developed world – cherish your access to birth control!

Last Friday, a couple of hours after dropping some cakes off at a home for disabled children (an idea that was suggested at the Corona meeting), I was on the boat with Anna and John on our way to Leleuvia Island Resort. It’s that accident of birth thing again – the yawning chasm between the haves and the have nots that is easy to ignore until you happen to catch sight of someone over on the other side. Even then it’s tempting to look away because it’s hard to know what to do and easier to get distracted than continue to contemplate deep injustice (“Am I being patronising?” “Am I doing enough?” “Oooh, that cafe does a nice iced coffee.”)

Anna had a rotten weekend as she woke up with a stinking cold on Saturday morning, but did manage to rally for a snorkel and a round of beach volleyball in the afternoon. John took me for a dive off the beach to see if I could remember how. It was just like riding a bicycle, even after twenty years. The only problem was that in the intervening years the tanks got a lot heavier and the weights a lot lighter. If anyone saw us, they’d have thought that we were being romantic, swimming along while hold hands. Actually, I wasn't wearing enough weight to ballast my body fat, so John was preventing me from bobbing up to the surface like a cork. We followed that up with a spectacular dive at a site called the Fish Market off of Motoriki where we saw sharks, barracuda and other big fish. I can’t wait to get into the water again. 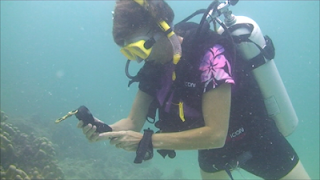 The numbers on the gauges got smaller since the last time I dived in 1991.

A hair shirt here is out of the question as there are so many amazing things to enjoy, and besides it would be too sweaty. However, a purposeful mindfulness of the fact that many things that I consider a right would be judged by a large proportion of the world’s population as a privilege and the rest as an impossibility is something that I will endeavour to achieve.

Peering out from beneath the parasol

I have taken to roaming the streets of Suva armed with a large USP multi-coloured golf umbrella. This isn’t because of the rain (though it does come in handy for that) but rather to keep my brain from being braised inside of my skull. While you’ve been digging snow from your driveways, I've been cooked into a state of tropical torpor which I can occasionally rouse myself from with liberal doses of air conditioning, gin & tonics and the odd trip to the beach.

One wonders how I could possibly have so many places to go and so many things to do without being in paid employment (that is coming, but on island time). As we have no car, I travel by taxi or bus. I know that I’ve blogged about the taxi drivers here before, but I had three last week that are worth mentioning. One drove at speeds faster on the roads of Suva than I’d ever been on the island before. His driving technique was to drive at great speed, anticipating that other drivers would either drive sensibly or just get out of his way. I suspect that he may not live much longer. The next one drove very slowly but entirely erratically. I imagine that his vision was somewhat impaired. Finally, there was the personable chap whose driving was completely normal, but had Fiji Water bottle half full of what I suspect was urine sloshing around next to the gear shift.

Last Wednesday, Anna and I (having survived the taxi trip into town) were having a skiving afternoon watching Django at the cinema when the lights came on and the usher appeared. She announced that there was a tsunami warning and we could either stay to finish the movie or get a voucher to return to the cinema another day. The cinema is right on the harbourside and while we were really enjoying the movie, seeking higher ground seemed like the sensible option. Ironically, we’d just seen the trailer for The Impossible with Naomi Watts and Ewan McGregor which is about the 2004 Boxing Day tsunami and decided that we wouldn't want to see it because we live on a tsunami-prone tropical island. When we emerged from the theatre, blinking against the sunlight, traffic was at a standstill and the pavements were full of people.

Previously I've experienced two types of natural disasters: earthquakes, which you can do bugger-all about when they strike except dive for cover, and hurricanes, which you have days to prepare for. I was at a bit of a loss with what to do next. Run to the top of the nearest tall building? Walk the 4ish miles home which is outside of the tsunami danger area? I literally had no idea if we had two minutes or two hours in which to act so I asked a couple who were studying a smart phone. According to them we had 2 hours to get to higher ground. Jumping into a taxi was out of the question as they were all full and weren't going anywhere anyway. 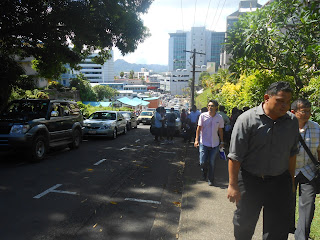 So we started to walk uphill out of town. I was really impressed by the calm, orderly and friendly atmosphere. The only upset person we saw was a hysterical ten-ish year old. We overheard her expat mother say “don’t worry, it won’t be like the movie” when we walked by. I will refrain from commenting on parenting skills, though I suspect taking a child that age to see The Impossible was perhaps a mistake and may have created neuroses that will last a lifetime.

The sun was searing, but we walked most of the way home before Anna’s friend stopped to give us a lift the rest of the way. My shirt was literally soaked in sweat (I didn't have had my brolly with me), but before I showered we had to prepare for the impending disaster. This included filling up water bottles and posting updates on Twitter and Facebook.

Fortunately, just as an email from the US Embassy popped into my inbox telling me to prepare for the tsunami, a friend rang to say that the warning had been called off.

You all may be wondering where John was during all of this. Earlier that day, he had rung me from a waterside hotel where he was attending a conference just out of town to tell me that his phone battery was nearly dead. Despite me saying regularly that we should have a family plan in case of an emergency (like a tsunami) we hadn't made one. Well, at least we know what the first rule of the emergency plan will be. Keep your bloody phone charged.